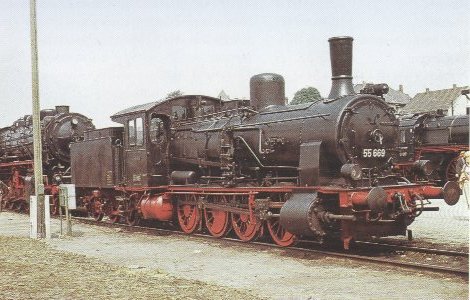 The Royal Prussian Railroads (Königlich Preußische Staatsbahnen, KPEV) needed significantly more powerful steam locomotives due to steadily increasing freight volumes in 1892. Present 2-6-0 locomotives of class G4 could not suffice any longer. Hence, VULCAN developed and produced the 0-8-0 saturated steam engine of class G7.1 in 1893. They were equipped with two jet pumps for direct supply of the boiler and had no pre-heater. The two-cylinder maschine used single-expanded steam and the driving rod was coupled to the third axle. It was equipped with an "Allan straight link valve gear" positioned inside the main girder of the chassis - the present locomotive is the only one of this type that is preserved in Germany until today!

Our museum locomotive 55 669 was built in 1905 and came into operation as SAARBRÜCKEN 2037. After WW I, when the SAAR railways were founded, it was named as SAAR 4426. DRG (Deutsche Reichsbahn Gesellschaft) took over all 13 engines of this type when the SAAR railways were fully integrated in the national railroad company by 1935. Between 1942 and 1944 it was used in various regions of Eastern Europe. Afterwards, it was based in Rybnik for a short time. By the end of WW II the locomotive was located in Bitterfeld. Lateron, it was transferred to Bw Erfurt. The last "active days" were in September 1965 and the permission for operation ended by December 31st, 1965. In the consecutive years it was refurbished as a museums locomotive in non-working condition by RAW Meiningen and integrated in the stock of Verkehrsmuseum Dresden.